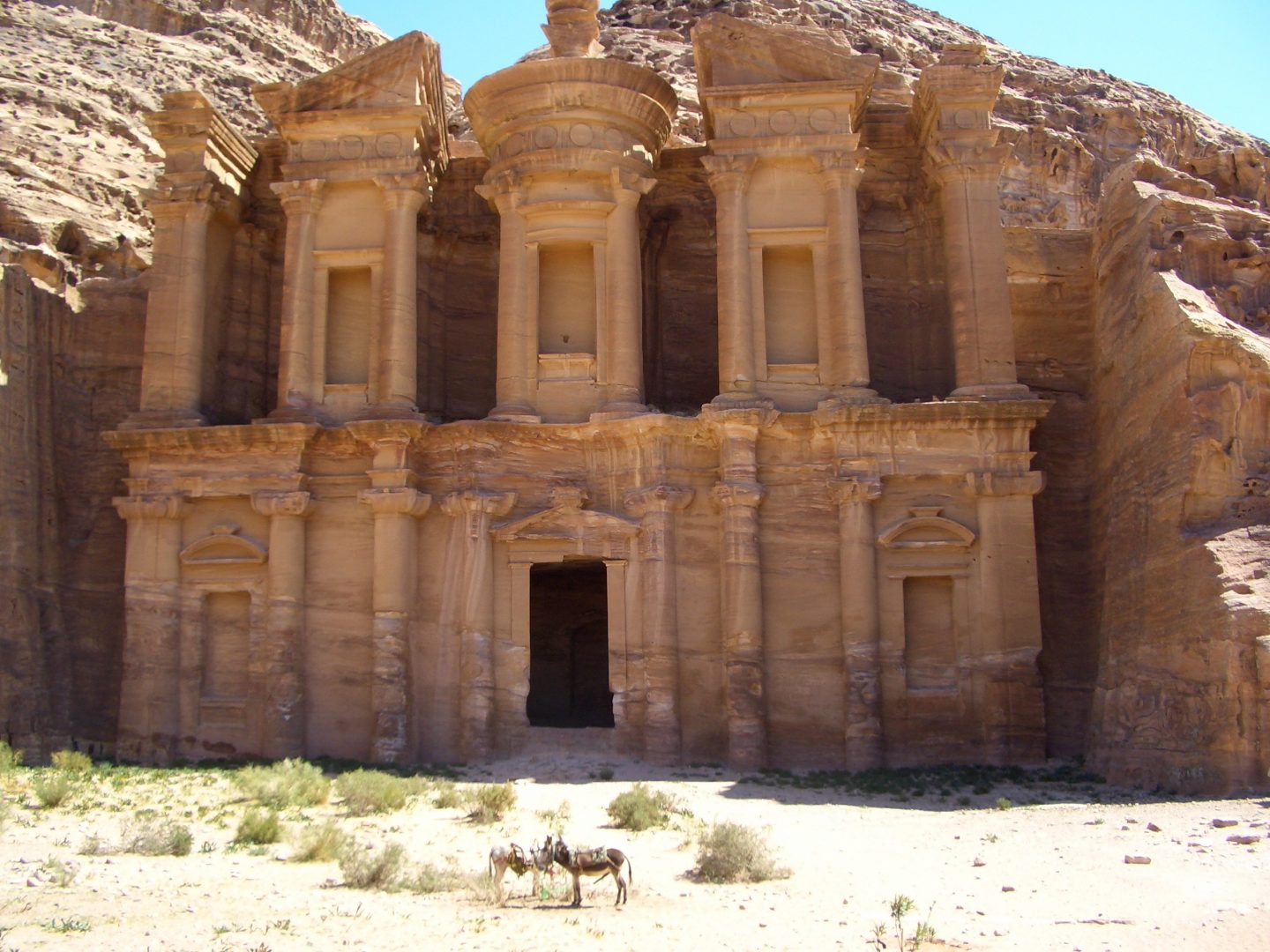 Posted at 20:29h in Articles by shannon
0 Likes
Share

Moviegoers recognize it as the site where Indiana Jones was filmed; history buffs know it as Petra. An entire city, complete with a theater, tombs, a monastery, dining halls, and the famous treasury, all cut into towering rocks, tourists visit Jordan just to lay awe-inspired eyes upon it.

Created by Arabs who dominated the trans-Jordan and controlled the frankincense trade in pre-Roman times, Petra is pure magic. From hiking through Al Siq, the kilometer long tunnel of rock that guards the entrance to Petra, to climbing over 800 ancient steps to stand beneath the majestic monastery and its columns of stone, to ascending rocky slopes to the Place of High Sacrifice and the Royal Tombs, days could be spent exploring Petra, but we only had two.

Friends told us to pack plenty of sunscreen. Barren and open, Petra sucks up the sun, providing little shelter from hot rays. But we arrived on a record-breaking day—when temperatures plummeted below normal.

We dumped our suitcases, layering the kids in every article of clothing we had. Tayanna was wearing a total of seven t-shirt, two jackets, and one hat, as well as socks on her hands and pajama bottoms beneath her jeans. Ditto for Nicolas. Paul (the eternal boy scout) had packed properly but I (the eternal optimist) had packed for the heat. If it weren’t for Abdullah (the bell man) lending me his massive blue cardigan, I might have suffered hypothermia.

Happily for us, the sun broke through the cold cloud cover in the afternoon, allowing us to remove some layers. Unhappily for Abdullah, his blue sweater was among them. Paul had tied it to his pack but as we lumbered down stone steps, I watched in horror as the burly sweater slipped sideways, its long arm dropping toward the ground at just the right angle, at just the right time, to strategically slice the top off a fresh pile of donkey doo.

The sweater got cleaned in much the same way I imagine many of the Bedouin still inhabiting the caves of Petra clean their clothing: by beating it against the rocks and pouring sand over the article time and again until it smells like the cleaner portions of the earth. Abdullah was handsomely tipped for the trouble.

Our second day was a little warmer but we were wearier. Giving into fatigue and our children’s pleas, we rode donkeys up to the base of the monastery mountain. I’m not sure if the locals, few of whom speak English, choose typically Western names for their donkeys to elicit amusement from or to mock the tourists, but the kids rode Michael and Suzie, which just happen to be the names of my brother and his wife. Indiana Jones turned out to be the name, not only of my donkey, but the stray dog, baby goat, mangy horse, and several camels we encountered.

Our day ended in more donkey excitement than we bargained for. Walking single file down a gravely path, we heard a voice call, “Beep, beep!”

Accustomed to young Arabs calling us from every which direction, whether to say hi or to practice interesting English words or more likely to sell us something, we ignored the voice but then suddenly—and I do mean pretty much two seconds later—I heard the sound of clacking hooves rushing toward us. We turned around to see a donkey rider whipping another donkey galloping in front of him, rushing the animal down the narrow mountain path, straight for us.

“Beep-beep” was an understatement. My daughter (same one who nearly fell in the Nile) was just far enough in front of me that I couldn’t reach her and as I leapt sideways, hollering to her to jump, she turned to see the approaching stead and screamed. It’s a sound that stops us in our tracks but not Indiana Jones. The donkey kept coming but luckily she jumped up, onto a rock, and out of its way. The animal rushed so closely past, the saddle brushed her arm, leaving a big bruise.

Next there was Bethany beyond the Jordan, floating in the Dead Sea, and watching Israeli soldiers patrol the other side, but those are stories for another time—though not another column.

It has been my privilege to share my overseas experiences with KTW readers for the past three years but like leaving the Middle East, its time to say Masalama to something I’ll never forget—writing this column.

See you once more—December 26th.