Posted at 20:31h in Ladies on Literature by shannon
0 Likes
Share 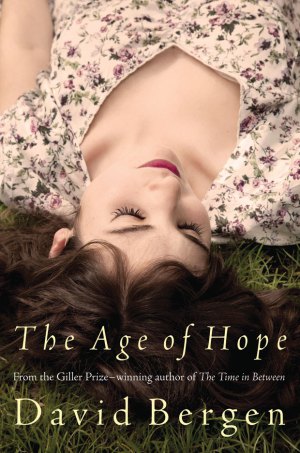 The LOL  just wrapped up another great Canadian novel: The Age of Hope. Named a top 10 contender for Canada Reads 2013, interestingly the book about a housewife born in 1930 & living in small town Manitoba was defended by the big city Toronto-based (and having met him, very personable) Ron MacLean, of Hockey night in Canada. While the novel didn’t win (in fact another of the LOL club’s reads, February, by Lisa Moore did) I can see why it was nominated.  A clean, easy, yet insightful and entirely engaging writing style, I was utterly amazed at the author’s ability to assume the voice of a beautiful but suppressed woman living at the end of an era: too old to really join the women’s movement, yet too young to be relegated to the role of domestic goddess.

The book opens when Hope is just 19 years old. Bergen establishes immediately that she is a very striking, if not beautiful woman. Yet while Hope realizes this and enjoys the attention it brings her, she never really owns her beauty and as the novel progresses, the reader comes to understand that in fact, sadly Hope never really owns much of any of her attributes. Instead she remains uncertain of her self in just about every realm of her life.

Feisty, quirky, cheeky even, Hope is helplessly wrought  with insecurity. She drops out of nursing school to marry the very stable Roy Koop, a teacher at Sunday School. Sturdy and caring and oh so reasonable, Roy fills all of Hope’s needs and adores her but at most she musters gratitude and a deep friendship for him. While she eventually comes to love him dearly, the reader is always left with the sense that like dropping out of nursing school, Hope perhaps did not risk enough in the realm of love. She goes on to have three children and lead a relatively peaceful domestic life, other then regular visits from her feminist friend, Emily, who both inspires and annoys her. It is when she becomes pregnant with her fourth child, however, that life begins to unravel for Hope. She is rocked by depression because she really doesn’t want another child and all the while her husband and everyone around her thinks it’s a wonderful thing.

She becomes so depressed, at one point she actually pulls over to the side of the road, leaving her infant daughter in the car, and wanders out into a cornfield where she lays down and goes to sleep. She awakens essentially in an institution where she ends up receiving shock therapy for depression. That particular incident inspired some very interesting conversation for our book club. Is there a Mother out there who at some point–exhausted, disillusioned, confused and maybe even mourning the loss of a life she once knew, overwhelmed by the responsibility of new life thrust upon her–that does not envision herself running away from it all? Of course, most of us do not, but that doesn’t mean we can’t empathize with Hope.

While this is a dramatic incident, it is one of few in Hope’s life. What is so amazing about this book and it’s talented author is the fact that the protagonist’s life is really very simple . Not a Hell of a lot happens in this book. It is a wonder that Bergen can keep the narrative flowing, keep the reader so engaged and interested in what happens to Hope; bring the reader to tears even when she faces great sadness and loneliness in her life, beginning with her children’s chastising of her and culminating in the loss of her privileged lifestyle when Roy loses his business, and finally when he dies, leaving her a poor widow.

LOL member,  Gail, commented that she had to keep referring to the cover to remind herself she was reading a male author, Bergen gets the voice of this woman so perfectly. And hostess, Karen, commented that this was from her mother’s generation right down to the nursing career sacrificed for kids, to the small Prairie town. It is a fascinating look at the typical domestic life of a Canadian woman at that time but most of all it is a journey into Bergen’s creative world, and well worth the trek. We would highly recommend this novel and it won’t be the last Bergen book that I read.

Age of Hope, Bergen, ladies on literature, LOL, The Age of Hope