What a robot taught us about healthy trust 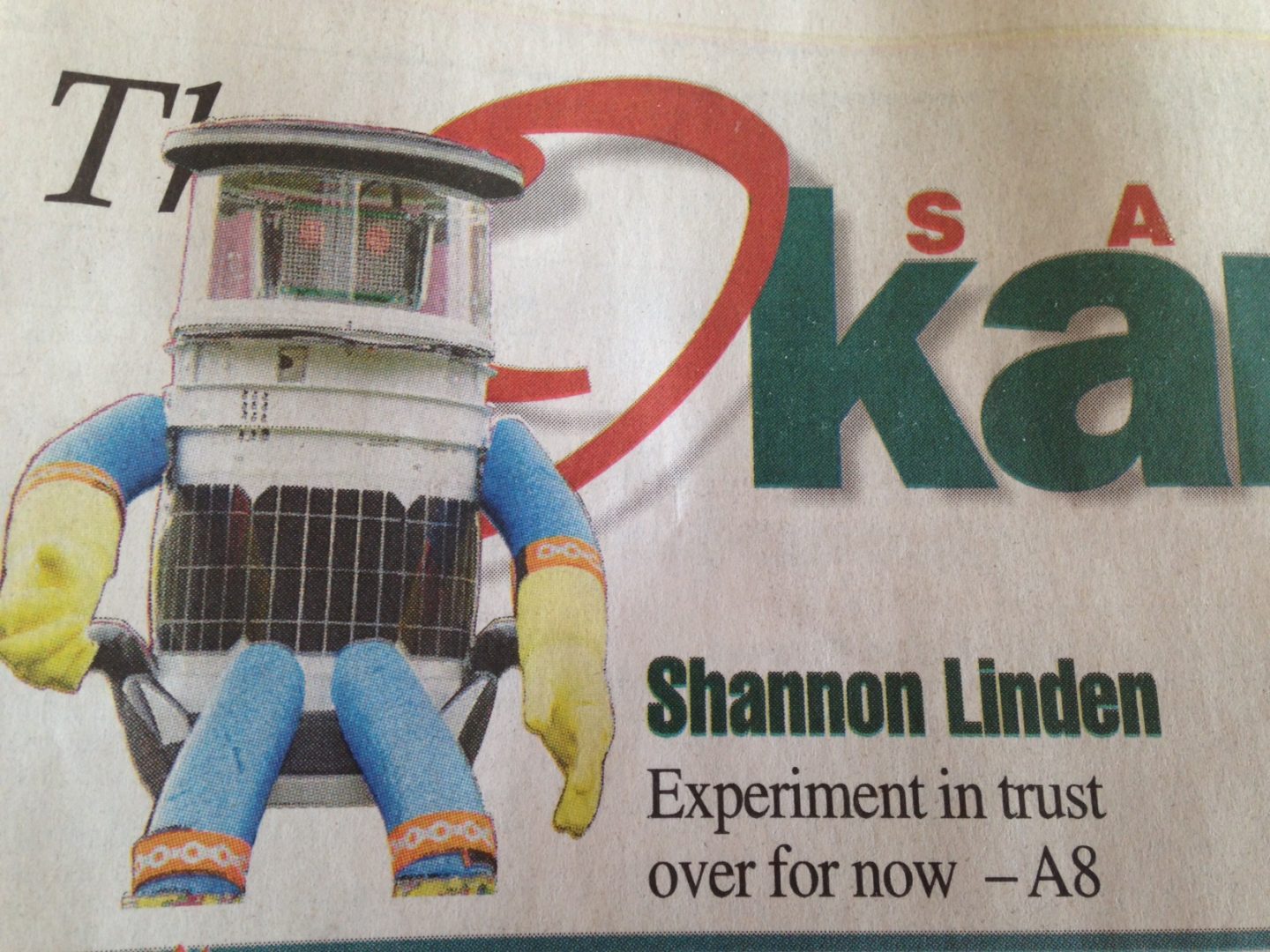 Posted at 20:04h in Blood, Health and Medicine by shannon
0 Likes
Share

It was a dark day in Philly when, in the home of brotherly love, a child-like Canadian celebrity was killed.

HitchBOT, the traveling robot that thumbed its way across Canada, the Netherlands, and Germany, met an untimely demise in the good old U.S. of A on August 1st.

No ordinary bag of bolts, HitchBOT was born into a caring family led by the robot’s co-creators, assistant professors, Dr. Frauke Zeller of Ryerson University and Dr. David Harris Smith of McMaster University.

While most research involving robots looks at the consequences of human dependency upon machines, HitchBOT was designed differently. The made-in Canada cutie measured whether robots could trust humans.

For the longest time it seemed they—or at least the charming hitchBOT—could. With a bucket for a body, Wellie boots for feet and garden gloves for hands, HitchBOT’s smile skipped across its face in happy LED lights.

Charming its way across the country, it sat coyly roadside or on park benches—wherever previous guardians may have left it to await the next ride.

Unquestionably cute, the robot was always vulnerable. After all, hitchhiking is not without its risks, especially if you’re three feet tall and must ask to be picked up because you can’t walk, your

While HitchBOT managed to make it from Halifax to Victoria last summer, accepting some nineteen rides and traveling over 10,000 km, it was no match for the meanies in Philadelphia.

The details of its demise are unknown (its noggin is still missing) but photos showing its severed spongy blue limbs and headless bucket body are gruesome enough.

Yet what’s most shocking, is not that 300 miles into its intended journey across the USA (it went from Boston, Salem, Gloucester, Marblehead, and saw the lights of NYC) it met a violent end, but that its family isn’t seeking revenge—hell, they’re not even interested in finding the Devils who did it.

“HItchBOT was designed as a social robot with a personality and all the classic elements of drama, so it had a quest, and that quest was fraught with obvious dangers,” Harris Smith told CNN.

“…We see this as kind of a random act and one that could have occurred anywhere, on any one of HItchBOT’s journeys.”

In keeping with the kindness the robot encountered and the fascinating manner in which people responded, playfully taking it places like Fenway Park so it could cross items like starting the wave at a major sporting event off it’s bucket list, researchers want to honor the empathy HitchBOT inspired. Tributes by the thousands (including offers to find its parts and finance its rebuilding) have lit up the Internet the way the charismatic creation sparked peoples’ smiles.

Americans have apologized, ashamed the robot was destroyed on their watch; Canadians recalled encounters and professed love and admiration for all the little robot represented: A thirst for adventure and a yearning to make new friends, completely dependent upon human kindness and compassion.

All the technology, including GPS and movable parts, the multi-talented team used to assemble HItchBOT, allowed the robot to make a cross continental run—and straight into our human hearts.

Stephen MR Covey (son of the late Dr. Stephen Covey, author of the Seven Habits of Highly Effective People) has written his own book: The SPEED of Trust—The One Thing That Changes Everything. Covey Junior says when trust is low, relationships suffer from a hidden tax that slowly erodes stability and limits growth while individuals (and corporations) that operate with high trust, experience dividends. These payoffs promote communication and growth.

Thankfully, in the robot’s case, a beheading doesn’t behoove a burial; HitchBOT may yet be brought back to life as its creators contemplate their next move.

The robot’s parts are on their way back to Canada and after an appropriate grieving, it may be reincarnated to resume its journey or to perhaps work in schools.

Regardless, HitchBOT’s findings will offer insight into humanity and inspire us to contemplate caring in a brave new way.

Perhaps the robot said it best with its departing message: “My trip must come to an end for now, but my love for humans will never fade. Thank-you to all my friends.”