What the LOL read this June 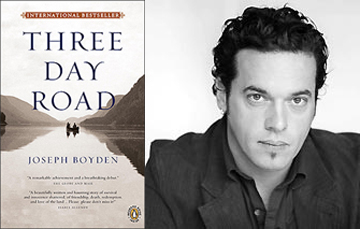 Posted at 00:21h in Books, Ladies on Literature by shannon
0 Likes
Share

I was thrilled when Laurie recommended, and Laura chose, Joseph Boyden’s first novel, Three Day Road. It’s been on my shelf for a couple of years and I finally found myself reading this 2008, winner of the Amazon Books in Canada First Novel Award and the Rogers Writers’ Trust Fiction Prize.

It tells the story of two Cree men, Xavier Bird and Elijah Wiskeyjack, best friends since they met at (and fled) a residential school. Xavier’s great aunt raises the boys in the forests of Hudson Bay, teaching them to hunt like expert sharpshooters—a skill that comes to win them notoriety in the trenches of World War I, when both men become highly accomplished snipers.

Sadly the war steals their souls as Elijah goes mad, becoming obsessed with killing, while Xavier realizes, “We all fight on two fronts, the one facing the enemy, the one facing what do to the enemy.”

Wounded and addicted to morphine, Xavier returns from the war, where Niska slowly paddles him in her canoe, on the three day journey back home, healing him with her own survival stories, infusing him with spirit, and willing his Cree roots to ground him in goodness, once again.

Brilliantly told, this book is gut-wrenching in its vivid descriptions of the horrors of trench warfare and the breaking of men’s bodies—and hearts—yet it is poetic—hauntingly beautiful—in its lyrical descriptions of Cree culture and customs.

A fictional tribute to real-life war hero, Ojibway sniper, Francis Pegahmagabow, this book is a must, historical read.