Close to Closing the Kitchen House

Never Argue with a Woman 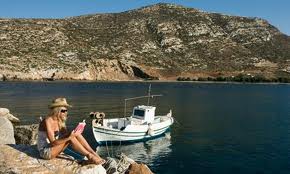 One morning, her husband returns the boat to their lakeside
cottage after several hours of fishing and decides to take a nap.
Although not familiar with the lake, the wife decides to take the boat out. She motors out a short distance, anchors, puts her feet up,
and begins to read her book. The peace and solitude are magnificent.

Along comes a Fish and Game Warden in his boat. He pulls up alongside the woman and says, ‘Good morning, Ma’am. What are you doing?’
‘Reading a book,’ she replies, (thinking, ‘Isn’t that obvious?’)
‘You’re in a Restricted Fishing Area,’ he informs her.

Happy Monday! One of the LOL members, Cara, sent out this joke some time ago to our group and I just had to share it, so I could start this socked-in Monday with a smile. Here in K-town it has been a dreary, overcast start to spring. Where I live, at the top of a mountain, we even had snow this weekend! In April! Thank God as down below in the valley, the sun was beginning shine and a few eager golfers took to the course. That’s more like it!

Hard to believe, but we are wrapping up this month’s novel, the Kitchen House in just a few days. Wednesday Ruth will be hosting our monthly meeting where we will eat, drink, and merrily discuss the novel, along with anything else we feel like talking about. So, sad as it is, I’ll only be chatting about this book a few more times.

And speaking of sad…I have only a few chapters left in the book but right now it’s pretty dismal. As the book builds to a climax, I feel that familiar frustration one endures when the cast of characters and the events they become involved in gets so complicated, the tension so high, you just want to wring someone’s neck to set it all straight. In this case, I’m talking about Lavinia. When her life starts to spiral out of control thanks to her mismatched marriage to Marshall, she takes to the opium like his mother did. As she starts and ends her day in a drug-induced stupor, her inability to stand up for herself is incredibly irritating. Granted, the idea is that despite the fact she is white, she is every bit as much the slave to her master as her black family is. Mama Mae and Uncle Jacob and Papa, however, are seemingly made of stronger stuff and Lavinia’s eager to please, martyr-like make-up is beginning to make me mad!

Meanwhile, author Kathleen Grissom hints at the crisis to come as Marshall drinks himself to death while gambling the plantation away. Belle’s boy has been raised without her and thanks to his life with Miss Martha in the big house, sees himself  as more white than “negra”. Given that he is the spitting image of his father,  Marshall, he could pass for white too. But the most frightening thing about Jamie is that he seems to have inherited his father’s charming but secretly cunning and ruthless personality and I sense something awful is about to happen as he fights against his station in life…that of the son of a black slave.

I have much praise for this fast-paced book and find the history tragic but fascinating. My only criticism so far is that it almost moves too quickly, with constant change and summaries of action rather than a more evenly paced unfolding of events.

I’m eager to see how it ends…until Wednesday…