Rub-a-dub-dub, where the heck is my bathtub? 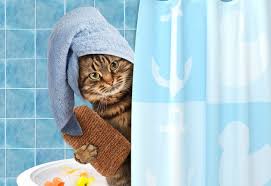 01 Jun Rub-a-dub-dub, where the heck is my bathtub?

Brand new, gleaming white, oval in shape; made of fiberglass, and weighing in at about 100 pounds, have you seen my bathtub?

It’s on the move, but that’s not the problem. In fact it’s a good thing, since I ordered it online, back in April. The real problem is this: no one knows where it is.

With an estimated delivery date of May 4, my bathtub has been MIA for nearly five weeks. Here’s what the shipping company can tell me: the tub left Quebec the day it was estimated to arrive here. Someone’s math is off and for once, it’s not mine.

The mysterious case of the missing tub (and other misadventures in home renovations) hit full swing the second week of May. Concerned, I called the Home Depot helpline.

“Do you mean the computers that track shipments? The truck my tub is traveling on? Which system?”

I hung up, picturing my bathtub sending out desperate GPS signals from the back of a dark truck. I gave the system another week before calling the shipping company directly.

“It looks like your item left Calgary,” the friendly operator said.

“Why on earth would it do that? Kelowna is on the way!”

“I know, but Vancouver is the major receiving center.”

Undaunted, the next day I called again. “Where is my bathtub?”

This was beginning to feel like a game. Like the elusive Waldo, I was sure my bathtub was just under my nose. I could almost smell its fabulous fiberglass.

“It’s probably in Kelowna,” the operator, stationed in Ontario, told me. “It hasn’t been scanned off the truck yet. They’re a little behind in Kelowna.”

Enter long weekend. For three days, while people partied in celebration of the Queen or maybe Prince Harry and Meghan Markel, my Orchestra 1150, freestanding, front drain, bathtub kept me up at night.

Now my contractor can’t keep going. He’s at a standstill because without the tub, there can be no plumbing, floor or wall tiles, painting…the list goes on like a running faucet, which I don’t have, because my bathroom has been out of commission for four weeks.

Next business day. “Hello, here’s my shipping number. Any sign of my bathtub?”

“Maybe, if you’re in a hurry, you could return it and buy another one?”

I don’t have a big bathroom and that’s why I special ordered a smaller tub. Plus it was an awesome price and good deals don’t happen every day. Then there’s the small problem of trying to return something you’ve never had.

Although they do have my cash. Yep, that tub is bought and paid for. And I will not give it up so easily.

Home renovations—first world problem, I know. But they do rank right up there with some of life‘s major stressors. And we all know stress isn’t good for us.

According to web M.D., stress is a change in the environment that requires your body to react and adjust in response.

A thick coating of dust dancing across every surface, debris piled up in the driveway and all of your belongings stacked and scattered in various rooms where they don’t belong…digging for clean underwear in Rubbermaid containers in your basement…qualifies for change in your environment, trust me.

In this case, your adrenal glands will release cortisol, which is useful if you are, I don’t know… scaling the wall on the Tough Mudder course and a line up of testy competitors is breathing down your neck. Not so much if you’re on hold with the shipping company that may or may not know the whereabouts of your item. In this case you better control that cortisol and be nice, or you may never see your tub alive.

Cortisol can make you crave fat and sugar because, according to Health.com, the hormone binds to receptors in the brain that control food intake. Stress can also cause insomnia and headaches. It can even wreak havoc with your memory because it interferes with neurotransmitters, so it’s hard to think clearly.

Stress can raise blood sugar levels, mess with digestion and raise your blood pressure by constricting blood vessels and jacking up your heart rate. Sound good so far?

Thankfully all of these negative effects can be countered by daily exercise (the best stress reliever around), a healthy, fresh diet that’s light on the processed food, meditation, and of course, a good night’s sleep.

I’m trying all the above and I have amazing contractors who work incredibly hard. I know, in the grand scheme of life, losing a large shipment is not a big deal, so I’m only complaining a little.

Still, if you happen to see a lost bathtub (or you have your own renovation story to share), drop me an email. You’ll make my day.