When Harold Fry Begins to Walk

Posted at 10:03h in Ladies on Literature by shannon
0 Likes
Share 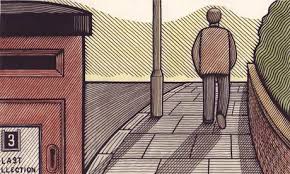 I chose this book. It’s my turn to host and while I have a list of titles, suggestions contributed by friends, I have this thing about just browsing and grabbing a book that grabs me. The Unlikely Pilgrimage of Harold Fry did just that.

Of course I loved the cover. The image of the back of a grey-haired old man, walking across a yellow field, clad in loose trousers, a blazer, carry a bag, making his way amicably into the distance, appealed to me. Browsing, as I always do, while grabbing groceries at Costco, I came across the book. A peak at the premise and a read of the reviews had me adding it to my cart.

Truthfully, I’m 75% finished this one and I will say this: the book, like Harold, is no hurry. It meanders amicably as he does, weaving its way in and out of Harold’s (and here and there his wife, Maureen’s) memories of many lost years. Told mostly from inside Harold’s head, he recalls a marriage that slowly cooled until husband and wife slept in separate rooms, a failed fatherhood in which Harold was more afraid of his own son than connected to him, and finally, a secret betrayal of the colleague Harold is walking for: the cancer-stricken Queenie, ailing in Hospice at Berwick-Upon-Tweed.

After receiving a letter from the hospice indicating that Queenie is dying, Harold is moved to write a simple letter back. As Harold sets out in his boat shoes, his return letter in hand, he just can’t make himself turn around. Postbox after postbox, he has the inexplicable urge to keep going. As hours turn into days turn into weeks, Harold meets a host of characters, always learning something about them and himself as he revels in the uniqueness of human beings yet in the sameness of the human condition: everyone has a story, all of them sad, at least some of the time.

I’m enjoying the book. It’s beautifully written and illuminating, though, like a river, at times it has a surging energy to it, but most of the time it just makes its way across the page.