Posted at 14:21h in Ladies on Literature by shannon
0 Likes
Share

In the beginning of Harold’s walk, there is hope. Embarking upon any new journey, there is trepidation, fatigue, uncertainty, but there is also excitement and aspiration. Harold can scarcely believe it himself: the quiet man who barely says boo is setting out to cross the country for a cause he didn’t even know existed…until that very morning, when the post brought a letter that would lend itself to a life changing event for its recipient.

For the first time in years, Harold feels intensely alive and while some people laugh at his boat shoes and chuckle at his lack of provisions,  Harold also meets those that encourage him, the girl at the gas station (the garage girl) being one of the most important. When she tells him to keep positive, explaining that her aunt had cancer and that by believing she would get better, miraculously, she did, Harold’s hope is restored. “You have to believe a person can get better,” she says. “There is so much in the human mind we don’t understand. But you see, if you have faith, you can do anything.”

Harold gazes at the girl in awe and henceforth carries her inspiration with him. Time and again he draws upon that memory for strength and encouragement, convincing himself that if he can just get to Queenie, she will live. Right alongside Harold’s hope, however, there resides a residual darkness, a very sad and secretive sort of a history that author, Rachel Joyce, hints at throughout the book. It has to do with David, Harold’s son. David is described as a typically argumentative, surly sort of a teenager with rebelliously long hair, a sharp tongue, and a brilliant, albeit brooding mind. As Harold continues his journey, he recalls moments in David’s childhood, beginning with his birth, when Harold was too terrified to even cradle the infant, to his early childhood, when he nearly lets his son drown. This is a particularly painful incident for Harold to recall and he comes back to it throughout his journey. At the time, David waded out into the ocean, going too far and getting caught in the undertow. A lifeguard must dive in and save him when Harold, once again, is paralyzed with fear and indecision. He has no idea what to do to save his son and his wife resents him for it. This sad pattern continues throughout David’s years at home and he and Harold simply grow further and further apart–if in fact they were ever united to begin with.

I understand, having read this  book now, how novelist, Helen Simpson (Major Pettigrew’s Last Stand) says this about the protagonist: “Harold Fry is infuriating, hilarious, and completely out of his depth.”  I too found him frustrating as hell. I just wanted to reach through the thin pages and wring his wrinkly neck! Come on, man! Make a move! Get a backbone! It’s so hard to fathom how he found fatherhood so scary. Of course his history (his  mother left him when he was young and his father became an alcoholic who brought home a series of women whom he called Harold’s “Aunties”) explains  a great deal, but I did lose my patience with this story line somewhat. Time and again the reader is brought back to this issue: Harold’s indecision; Harold’s inability to act; Harold’s fear of intimacy.

But of course, these traits are what Harold is really walking away from. It’s his nondescript past that propels him forward, one foot in front of the other, as he struggles to make amends while making way for a fresh start. 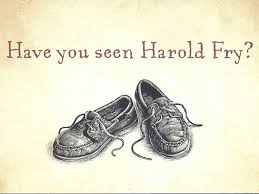