A Deeper Side of Andre

01 Feb A Deeper Side of Andre 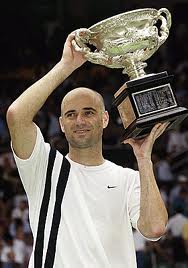 After reading Andre Agassi’s autobiography, you appreciate just how many times the superstar athlete lived through close calls that nearly cost him games, friendships, love, his education, and most certainly his self-respect.

Well, this is a close call for me. Our meeting to discuss the book is tonight. And I’m not done. It’s not going to look good if I show up with an incomplete.

Really, I have a handful of pages left and I feel confident I’ll win this match and besides, I don’t want to give the ending away. But I do want to talk about a few very profound parts of the book.

1) When Agassi wins Wimbledon. It’s a touching moment when he returns to the locker room, looks at his warped reflection in the gold cup and is overwhelmed with waves of emotion, including relief, elation, and “even a kind of hysterical serenity” because he’s finally earned what he calls “a brief respite from the critics, especially the internal ones.”

Before I read Open, I had no idea Agassi was plagued with such all-consuming insecurity coupled with the fierce determination to be someone. It’s very real, very poignant, and very personal. Again and again in this book, I was reminded that, superstar or not, he (and all the other famous folks out there) is just a person, an ordinary man in extraordinary circumstances.

2) OK, so I just have to say, there’s a little Canadian in Open. Actually, a little Canadian with a big voice. When Agassi is “dating” Barbra Streisand, he talks about how huge her talent is, how in awe he is of the voice that can “pervade every square inch of a room.” Then he takes Barbra out to his car to listen to a CD of a “new sensation”, a Canadian named Celine Dion! LOL Cheers! Andre for your bit of Canadiana.

3) When Agassi finally wins the 1994 US Open, he is the first unseeded player since 1966 to do so. He looks up to his box and sees the people he is closest to, all assembled in support of him and comments, “My new girlfriend (he and Brooke were still dating), my new coach, my new manager, my surrogate father. At last, the team is firmly, irrevocably, in place.” Of course it’s bittersweet because as we all know, he and Brooke’s marriage does not last and many people who enter Andre’s life seem flightly. That said, he is fiercely loyal to those closest to him, and very dependent upon the love and support of the people he entrusts with his heart. And unless there is some shocking revelation as I near the end, they in turn are deeply loyal to him.

Agassi’s yearning to be part of a team, not only for the camaraderie of it, but for the energy and group support and the ability to celebrate wins together as well as shoulder falls, is rather sad. As his career is spiraling downward, before he really goes to the dark side with drugs and depression, he is a member of the US Olympic gold-medal winning team and he speaks of the pride and joy of standing atop the podium, listening to the American national anthem, the weight of gold around his neck. That kind of pride and joy is scarcely recorded elsewhere in the book, despite the fact he was a celebrity and the number one player in the world.

4) When Brooke is battling to get into “wedding dress” shape, she tapes a photo of the woman who has the best legs in the world to her fridge for inspiration…yup. None other than Steffi Graf. Nice plug for your wife, Andre!

Details of tonight’s meeting to be posted on Monday. Oh, yummy!

Please check back in for Free for all Friday, when I’ll have a guest blogger who will talk about what reading means to her family and how the LOL charity of choice, Project Literacy, is dear to her heart.