Posted at 12:24h in Ladies on Literature by shannon
0 Likes
Share 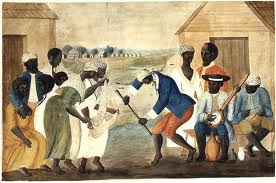 I’m a little more than half way through the Kitchen House and enjoying this book immensely.

But when it comes to blogging about it, there is something I’m struggling with: choosing what to say or moreover, what not to, because this book moves at such a fast pace, is filled with so many plot-moving events, everything I want to write about could be called a spoiler! If I speak of Belle’s baby, I give away the fact the beloved black servant (daughter of the captain) gets pregnant. Of course, I don’t have to divulge who the father is, except to say it is not Belle’s love, Ben. In fact this child is not born of love at all. I’ll let you imagine how Belle’s pregnancy comes about if you’re not there yet; I’ll encourage you to buy the book if you haven’t started!

I could talk about Lavinia and her growth, but again, I risk giving important events away. I will say this: as she grows up, becoming more fiercely devoted to the black slaves who raise and love her, circumstances are such that she is forced to make moves she would not, except she is white. And despite the fact she isn’t exactly free herself (earning her keep on the plantation through kitchen work and various chores)by virtue of the colour of her skin, she claims a higher status and the inevitable conflict between remaining with the people she loves and aspiring to a free life continues to build.

When the captain becomes quite ill, Lavinia is assigned to Miss Martha’s care and her affection for the matriarch of the plantation grows. Incredibly compassionate, intelligent, and intuitive, Lavinia’s actions throughout the book thus far, are largely driven by empathy and a desire to please. Describing herself as slight and thin, Lavinia says, “I suspected I was rather plain, although no one told me so. My fire-red hair was darkening to auburn, and I wore it in long braids…With the security of the past two years, I had become more sure of myself and was certainly more outgoing. Yet an underlying anxiety always stayed with me. As a result, I was careful to please and quick to obey.”

Lavinia’s first crush develops with one of the characters readers will surely love: the sweet and seemingly strong and sexy (yet frightened following a terrible beating that is brutal to read about), Ben. A natural pair and magnetically drawn to one another, Belle and Ben, aspire to marry, but Lavinia’s childhood affection for the unavailable black slave is undaunted.

As she begins to mature, Lavinia’s affections move to another, equally charming character, the new white overseer, Will Stephens. Kind, fair, and compassionate, Will is a welcome change from the cruel and racist Rankin, but while he teasingly displays his affection for Lavinia, the much older Will is smitten with the beautiful Belle. Of course, sadly, this is an affection that can never be fulfilled but the reader secretly cheers for the two characters to come together.

On page 150, there is a wonderful scene in which Will, driving the wagon to church, is teasing a 12-year old Lavinia, his companion up front on the seat with him, while the blacks ride in the back.

“Do you have a beau?” he asked after a time.

Suddenly, I felt bold. “You might want to wait for me,” I said, “until I group up. I could be your girl.”

Lavinia goes on to describe how she is smart, cooks well, and is great with children. The reader absolutely falls in love with Will when following Lavinia’s suggestion that Belle believes she’ll grow up to be a beauty one day, Will responds, “I believe you already are,” and winks at Lavinia. And when Lavinia describes her ability to read and soon to kill chickens too, Will squares his shoulders and says, “A beauty who can read and kill chickens. I think I might have to consider this proposal seriously.”

It’s light and wonderfully written…but is it foreshadowing of Lavinia’s future? We shall have to see!