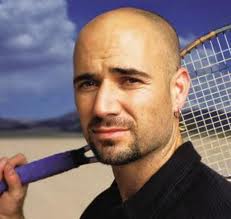 So as I’m reading Open, tennis superstar, Andre Agassi’s autobiography, something interesting occurs to me. While this  a tell-all and tell- it-candidly, non-fiction sports memoir and the LOL just completed, Annabel, the deeply moving, beautifully imagined fictional work of Kathleen Winter, one might think there could be no cross-over between two such different books. But here’s where they intersect: at the father.

While Treadway (Kathleen Winter’s favourite character in her own book) was domineering, traditional in that his expectations of his son were completely confined to a typical version of how a boy might grow into a man in remote Labrador, he loved Wayne. Ultimately, everything Treadway did, while sometimes reprehensible, was born of genuine love and concern and in hopes of bringing up his boy to fit in with the men.

Andre Agassi’s father is utterly domineering too. He too sets out to mold his son into the fatherly vision of what a man ought to be, only in this case, the boy is groomed, not to fit in, but to stand out, above the crowd. Be better than all the rest, no matter what the cost.

While Treadway  fails to see the cost of neglecting Wayne’s feminine side and hiding his son from the truth, he comes to understand this, and he does what he can to make up for it. I’m half way through Open and I’m going to predict this is not the case with Mr. Agassi Senior, who seems incapable of seeing his ‘real’ son.

Abusive and maybe even a little insane (there is suggestion Andre’s father suffered a head injury and he certainly displays the irrational behavior and wild temper to suggest it), Agassi Senior is a raving lunatic, comical almost, except he’s frighteningly sad. 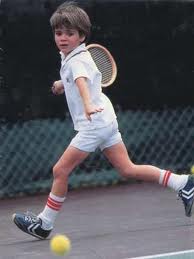 Early in the book, Agassi describes how his dad decided his son would be a tennis player very, very early on. Apparently at the age of one, toddler Andre  watched a ping-pong game, only moving his eyes, a “sight” that delighted his dad who claimed it was proof Andre was a natural. And when Andrea was still in his crib, his father hung a mobile made of tennis balls above the bed and encouraged his son to bat at the balls, not with his chubby baby hand…with a ping-pong paddle he’d TAPED TO IT!

Can you say crazy?

Did his father’s antics pay off on the court? Seems so.  In real life? I sense we’re heading for some dark days in this book as Andre starts winning in the game of tennis, while becoming increasingly confused, rebellious, and hungry for authenticity in the bigger game of life.