Cheers! To LOL member, Judy, for hosting our meeting to discuss, Annabel

If you’ve read my inaugural column in the newly launched magazine, Okanagan Woman,

(http://www.okanaganwoman.com/), you’ll know I’ve belonged to a couple of different book clubs over the years but Wednesday evening’s LOL meeting ranks right up there as one of the best discussions about a book that I’ve ever been privileged to be part of.

Kathleen Winter’s novel, Annabel, generated so much talk, it has to be the first time book club has essentially stayed on track, no diversions of dress (although we did mourn Bonnie’s broken toe and the limitations it places on her footwear) or other topics like kids, jobs, and Christmas clean-up could dissuade us from the topic at hand: this award-nominated novel. 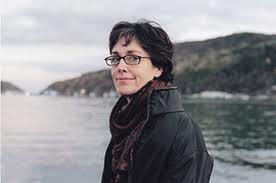 We warmed up with wine. Obviously. Then Judy put me and my Costco selection of savories to shame. Not to say Costco doesn’t turn out some fine food, but Judy’s table was brimming with home-made bounty. Vikki and I are still guessing at the mystery ingredient in the puff pastry sticks. And the Pavlova dessert…oh…melt-in-my-mouth-my! I am officially inspired, not to cook, but to create a recipe tab for the LOL site so that readers may gather the best of what the real LOL cooks (and even those of us who pretend) are serving. Stay tuned!

Probably the most asked question of this author–and certainly one each of the LOL had–is, “What prompted you to write about an inter-sex character?” (Inter-sex, not hermaphrodite, BTW, is the appropriate term, I have learned, for someone born with both male and female genitalia). For the answer to this question, and many more, read this wonderful interview with Kathleen and National Post reviewer, Ron Nurwisah: http://arts.nationalpost.com/2010/11/02/q-a-kathleen-winter-author-of-annabel/

Some of the hottest discussions last night were prompted by some of the following thoughts:

* What are the differences between men and women? What are the expectations society places upon us to conduct ourselves in traditionally gender-specific roles? How much is genetics…nature…versus the way we are raised…nurture?How can we honor both the male and female in us all?

*As a group of women, we were deeply affected by Jacinta’s guilt and grief over her lost “daughter”, yet we were disturbed by her inability to express her feelings truthfully, out loud, to her husband. We wanted her to fight for Annabel and we cringed at the patriarchy that guided so many of the decisions made by families in Labrador.

*Beautifully crafted characters brought about mixed feelings. Some of us despised Treadway and could not find our way to forgive him when he “destroys” Wayne and Wally’s connection, physically, emotionally, spiritually…until the author brilliantly brings him around, redeeming him with some incredibly touching acts, closer to the end of the book. Others had the grace to see his actions as misguided love right from the start. I wish I could say I was among the gracious…I was livid with him! And Jacinta for not fighting for Wayne at that point in the novel.

Most of us found Jacinta initially intriguing but ultimately pathetic, until we saw her as suffering from depression. Then we were able to understand her actions…or rather, inaction. We loved the feisty and utterly independent Thomasina, although some were disappointed in her lack of assistance to her good friend, Jacinta, in her time of need. And if you read my last blog: I loved Robin Williams!!

*How much of the novel was based upon medical fact and how much artistic license was taken? As a physician, Gail was intrigued by, but could find no evidence of, self-fertilization in inter-sex persons.

And what does Ms. Winter think of all this? Well, stay tuned to find out! I’m thrilled to be chatting with her this week. Check back on Monday to learn more and look for the next issue of Okanagan Woman, for my complete story on Kathleen and her brilliant book!