Posted at 10:58h in Ladies on Literature by shannon
0 Likes
Share 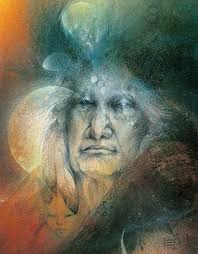 I love Richard Wagamese’s descriptions of the matriarch, Naomi. From one scene to the next he infuses a deep, soulful respect for the wise grandmother who teaches Saul, guiding him in Ojibway traditions, sheltering him from neglect and protecting him from environmental–and emotional–storms.

Wagamese describes the impending winter this way: “The cold that year came fast. It descended on us like a slap of a hand: sudden and vindictive.” Naomi and Saul are forced to flee God’s Lake, seeking shelter down river, where Naomi’s brother lives in Minaski. Naomi does everything in her power to protect Saul, cutting shawls out of the canvas of a tent, and putting his hands beneath her skirt and holding them between her thighs to warm them. She battles to paddle into the teeth of the wine, portages over icy rocks, hauls supplies, at last creating a lean-to with the tilted canoe, covered in spruce boughs. She sings to Saul, tells him stories to keep his spirits up and infuse his soul with Ojibway strength.

On the third day the pair run out of food and Naomi cuts a swatch of buckskin from her moccasin and instructs Saul to suck on it to moisten his mouth, the water too cold to drink. On the fourth day, after dozing off in the canoe, the river shoots them into some boulders, “the belly of the boat split at the nose, water pouring in…”

It is an epic battle of man versus nature as the pair endlessly endure the winter storm, surviving on gumption and faith and love for one another. When Naomi finally succumbs, leaving Saul truly orphaned in the world, the story takes a terrible turn as he is discovered and sent to the dreaded St. Jerome’s school.

I don’t want to give too much away…one must read this book…but stay with me. Tomorrow we talk the horrors of residential schools–and the hope–of hockey.