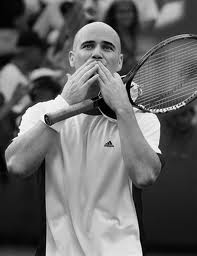 Please, don’t get me wrong. Open is outstanding and well worth the read. And it is, after all, a sports memoir, right? It’s just that I personally find the personal parts much more interesting, like the fact he dated Barbara Streisand…who knew?

I said from the outset, I know nothing about tennis and even now that I can toss around more vocab than when I began this book, I still have zero clue how the scoring works (though I love that “love” thing)…but at the end of the day, it’s not the tennis that keeps you turning the pages.

Just like it’s not the tennis that keeps Andre putting one athletically endorsed foot in front of the other on courts of every surface in every part of the world…it’s life. His life. His struggle for self.

There’s the relationship with Brooke Sheilds, respectfully told but clinically described in rather matter-of-fact, basic terms. Clearly both stars suffer from a deep-seated insecurity, despite their notoriety in the world. Completely unlike the colourful, romantic language  Agassi uses to convey his observations about his current wife and the mother of his children,  Steffi Graf, even before his love affair with Brooke begins, the language he uses to describe the beautiful Brooke is so basic and Agassi makes it quite clear, it was a doomed relationship from the start. Lost, on the verge of retiring, and purposely loosing matches, he orders up a spectacular diamond, drops to one knee on a private beach in Hawaii, and proposes because he’s not sure what else to do. With a pattern of ending relationships at the two year mark, the restless athlete decides he’s going to finally commit to someone, something, and since he loves Brooke, it may as well be her. When she asks him to repeat the proposal (like a director asking for a redo of a scene) later so that she can be sure she remembers it, Agassi thinks to himself he may forget it too since he can’t believe he’s gone ahead and done it. 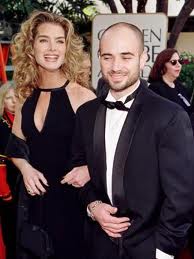 While it seems the two stars came into one another’s lives to fulfill some purpose and while there exists a mutual respect and affection, they are an oddly united couple, destined to loose the match of love.

…Can’t believe our next LOL meeting is in a few days…Looking forward to finishing up this book and sinking my teeth into some fascinating fiction in February, not to mention delectable food  on Wednesday night, when Kathy hosts the LOL.