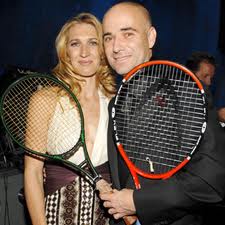 So we know Andre Agassi married Stefi Graf in 2001 (and remains married to her, with a son and daughter) but did you know he always had a thing for her?

Talk about foreshadowing! At about the mid-way point, after Agassi has finally won his first slam, he is beside himself excited, largely because he can’t wait to dance with the winner of the women’s event, Stefi Graf. Apparently he’s always had a crush on her, as he attests:

“I was thunderstruck, dazzled by her understated grace, her effortless beauty. She looked, somehow, as if she smelled good. Also, as if she was good, fundamentally, essentially, inherently good, brimming with moral rectitude and a kind of dignity that doesn’t exist anymore…”

S-woon! What more can be said? I did suggest the man is a poet.

I found it interesting that at that point in his life, Agassi thought he was head over heels with “Wendi” and indeed, she sounds like a fun, supportive, caring woman, and I might add, not a jealous one! She has no issue with the fact Agassi has always wanted to meet (and can’t wait to dance with) Steffi. Wendi even helps Agassi pick out the tux he will wear for the event.

Say what? Hmm…obviously Wendi is not a Cancer.

Cheers! to her for being so “open” to sharing her man, although apparently Agassi’s admiration of Graf, went a little deeper than anyone expected! More to say on this matter of the heart, stay tuned!

Meanwhile, here’s a link to great photo of the tennis stars and some stats on their courtship, marriage, and kids!