The Unlikely Pilgrimage of Harold Fry: Great, According to Good Reads

02 Jul The Unlikely Pilgrimage of Harold Fry: Great, According to Good Reads

Posted at 21:06h in Ladies on Literature by shannon
0 Likes
Share I enjoy the goodreads site (www.goodreads.com/book/show/13227454-the-unlikely-pilgrimage-of-harold-fry). It’s a great spot to hit if you want to read an array of reviews. In fact, I realize I should be contributing to said site! Why not post an LOL take on the novels we’ve read? I’ll add it to my ever-growing list of to-do’s….

While my personal opinion of this book is mixed, I found the reviews on goodreads to be largely favourable. In fact, the book generally receives four or five stars from most readers. Common sentiments are along the lines of “moving,” “inspiring,” “sweet,” “honest without being overly sentimental,” etc. Many readers commented that the book reminded them to embrace their own lives and to take chances, seize opportunities presented to them, for it is Harold’s painfully sad, dull life–the chances he didn’t take, the mistakes he did make– that finally motivate him to take a stab at getting it right.

I really enjoyed the book, but like some readers, I found it somewhat like Harold himself…a little long and dull in parts. The walk went on a little too long and when Harold’s journey becomes public after he meets a journalist who writes his story, things really slowed down for me. There is a section in which Harold becomes rather like Forest Gump on his run, with an entourage of followers trailing behind him. Some of these admirers are simply on a quest and see Harold as some sort of leader to something higher; others seem to have their own agendas aimed at personal fortune or fame via their relationship with Harold. That might truly occur around someone who would embark upon such a pilgrimage and I know Rachel Joyce was commenting on the pro’s and con’s of a public life and the insincerity of some followers and the power of social media to mislead, etc., but I couldn’t help but feel she’d recently watched Forest Gump when even Harold’s followers make up t-shirts for everyone to wear. It’s not that the section was unnecessary and I guess in hindsight it wasn’t that long, but it was a little slow.

When Harold does finally make it to Berwick-upon-Tweed but once again is paralyzed by his inability to act, I found myself getting a little annoyed…I knew he would eventually go in and see Queenie, so a part of me was like, “Okay, just get on with it. Time to wrap this story up.”

All that said…I’ve come away from the novel with a need for quiet reflection. It certainly does make one ponder one’s decisions and I for one shuddered at the thought of a life as dismal as Harold’s. Of course, the reader learns the real reason Harold and Maureen have become strangers in their own home and I can’t give it away or it would spoil the book…but it was really a sad, poignant tale that manages to shed light and bring hope in the end as Harold succeeds in his quest and begins life anew with Maureen (who has in turn pondered her own life and decisions in Harold’s absence).

Here then are a couple of reviews from goodreads, one favorable, one not so much.

Tomorrow eve is our LOL meeting chez moi! Can’t wait to gather with the girls to sip and savor…and hear if they were (or were not) in favor!

Read from July 23 to 27, 2012
Harold Fry has never done the unexpected, having spent the last 65 years living a quiet sheltered life. Retired for the last six months Harold shaves each morning and puts on a tie only to sit in the same chair with nowhere to go as his wife Maureen silently cleans. One day he recieves a letter from an woman from his past who informs him she is dying. Harold pens his reply only to be disappointed by his response so he makes a snap decision to walk across England from Kingsbridge to Berwick Upton Tweed to save her.With nothing but the clothes he is wearing and the small supplies he buys along the way Harold slowly makes his way across the country. Along the way Harold will initially be critical of himself as he sees himself alone in the world thanks to uncertainty that he had all throughout his life from a young boy, a father to David and then with a wife he no longer communicates with. It’s only when he begins going out of his comfort zone by talking to others along the way that he soon discovers the sad and beautiful truth that he is not alone and there are many people just like him that are struggling to put one foot infront of the other.But for all the profound sorrow Harold encounters this is not a sad read. Rather it suggest that new beginnings can always be found and it is never to late to do something extroidinary. British playwright Rachel Joyces first novel is an endearing debut full of emotion. I found myself riding all the emotions with Harold and was willing him on all the way. At the heart of this is a story of a simple man, a threadbare marriage and a fractured country. All of this makes for an unforgettable and thoughtful story. Do yourself a favour and take a walk with Harold a simple man who will get into your heart and leave you with a smile from ear to ear.
34 likes · like flag
follow reviews

Read from October 16 to 24, 2012
I fear I am heartless.Some people I respect as readers give this book five stars and I just can’t.Basically, it is about a man taking a walk. Beginning, middle, end. He gets bad news about an old friend and just starts walking, wearing the wrong kind of shoes and without bringing his ‘mobile.’

Most of the book is about regret and finding his way back to what matters. So, I get that, but it didn’t poke through my tough exterior, I guess. You have my permission to call me heartless.

I listened to the audio, which may be partly to blame for the plodding pace to the book. Still, Jim Broadbent was a great reader. I shall have to try to find him reading something else!

This book was on the longlist for the Booker, but didn’t make the shortlist. One book that did is also about a walk, but has far more complexity and emotional range. I’d recommend it entirely. (The Lighthouse)

I’m noticing that lately, books about humdrummity are really getting to me. I need some profundity and depth, or lacking that, some interesting characters with interesting lives.

Some of Harold’s observations:

“Life was very different when you walked through it.”

“Life is made up of people putting one foot in front of the other.”

“Nobody’s frightening, if you stop and listen.” 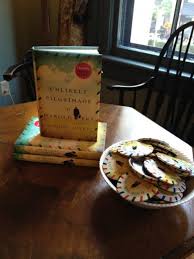