Who reads Westerns? We do!

Posted at 17:06h in Ladies on Literature by shannon
0 Likes
Share 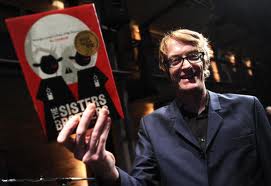 Okay, I’ll admit it. When Laurie selected the Sisters Brothers for her book choice, I was intrigued by the title but turned off by the fact it’s a western. Not a huge fan of the genre, I was a bit of a reluctant reader in much the same way that I was a hold out when my husband suggested 3:10 to Yuma is one of his favourite flicks.

This is why we belong to  book clubs: to force, er…encourage us…to venture beyond our comfort zones and into territory unknown. And this is why we occasionally acquiesce to our husband’s movie selections.

The Sisters Brothers is a brilliant book; And 3:10 to Yuma (if you haven’t seen it) is a phenomenal film. No matter the genre, great writing, intriguing story telling, colourful characters, and plenty of tension-filled drama, make for excellent entertainment.

I love the way the book opens, immediately throwing the reader into the characters’ lives as Eli sits out front of the Commidore’s estate, waiting while his brother negotiates their next killing job inside. Right away author, DeWitt, establishes that the narrator, Eli Sister is a pensive, deep thinking man with a detached regard for life necessary to perform his work as a killer yet with an oddly endearing empathy for animals, like his horse. Having lost the last one to a fire, Eli sadly recalls the unnamed horse’s strength and loyalty. The fact he does not name his horses hints at the necessity of detachment from anyone or anything he might come to love. Stuck now with a new horse, already aptly named Tub, Eli mourns the loss of the old one and the inadequacies of the new one, yet admits he is reluctant to whip Tub as he takes no pleasure in animals’ pain.

Foreshadowing his growing dissatisfaction with his profession, Eli complains about his lesser wage to his lead-man brother, and Charlie retorts that Eli can let the Commodore know of his unhappiness if he chooses. Eli responds:

And thus begins the journey toward Eli’s resolution…which is bound to end unhappily I fear.